EK-Supremacy EVO is an evolution of an EK-Supremacy flagship performance water block, introduced in 2012. More than one year worth of round-clock development, CFD analysis and rigorous testing is now resulting in ultimate performance, unmatched by any other product on the market.

EK-Supremacy EVO is a universal CPU water block that fits all modern CPU sockets with a universal mounting mechanism that offers error-preventing, tool-less installation. LGA-115x and LGA-20xx sockets are supported out of the box. However, additional sockets support is available free of charge. The result is a perfect installation which results in optimal performance every time. EK-Supremacy EVO is truly the only product for performance seeking enthusiasts. The key features are:

The EK-Supremacy EVO uses the same cooling engine as it’s predecessor. The cooling liquid accelerates through jet plate’s nozzle and turbulently continues its path through numerous very thin channels, which provide extreme heat dissipating surface area. Specifically designed and carefully machined copper base (sometimes referred to as ‘cold plate’) is made from purest copper available on the market and is further polished to absolute mirror finish. This alone greatly improves the cooling performance of EK-Supremacy EVO.

The top is made from satin-finish CNC machined acrylic glass while the insert is made from injection molded transparent MABS polymer. Plexi top variants have two slots for easy installation of 3mm LED diodes. 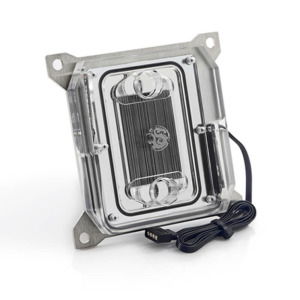